The Department of English and Humanities at ULAB organized the Spring 2022 Commencement program on June 7, 2022, for the graduating students of BA and MA. The event was organized by the students of DEH from Batch 183 to congratulate and celebrate the well-deserved success of the graduating students, and wish them all the best as they set out into the world. The theme for this commencement was Shades of Memories.

The Speaker at the Spring 2022 Commencement was Mr. Quazi Sabir, the founder and CEO of Khelbei Bangladesh and former Program Manager at the U.S. Embassy Dhaka. Pointing out some major life lessons, Mr. Sabir encouraged the graduates to seek to make themselves heard. He drew attention to the fact that students of the English department are more inclined to acquire better comprehensible skills and view aspects of life from multifarious perspectives. The Speaker motivated the graduates to work hard and keep learning. He rounded up his speech by enthusiastically insisting that the graduates shape their own journey according to their perception and passion.

The event was set into motion with warm congratulations to the successful graduates by Professor Imran Rahman, Vice Chancellor, ULAB. Emphasizing the necessity of following one’s passion, he advised the students to explore until they find their dream job. In his remarks, Professor Rahman highly encouraged the graduates to embark on a journey that would leave a footmark on the real world.

Professor Shamsad Mortuza, Pro-Vice Chancellor, ULAB and Dean of the School of Arts and Humanities, congratulated the graduates and wished them a “fare forward”. He prompted the students to explore every prospect of creativity, and urged them to advance by using all their learning and experiences from ULAB. Professor Kaiser Haq then addressed the importance of studying English, as the discipline, being the successor to the classics, also comprises the knowledge of various fields. He concluded his speech by stating that every student has the potential to perceive, grow and nurture themselves in their own way, as every person is unique.

Despite being unable to physically attend and celebrate the commencement event with the graduates, Ms. Arifa Ghani Rahman, Associate Professor and Head of DEH, sent a heartfelt congratulatory video message as a surprise to the students. She stated her hope to meet the graduating students soon and asked them to keep in touch. She concluded by wishing the graduates the very best as they go forward into higher studies or jobs.

Toward the end of the formal segment, a brief certificate-giving ceremony was organized for the graduating students of the prestigious DEH Scholars Program. Mohammad Mosiur Rahman, Senior Lecturer, DEH and Advisor to the Program, gave an overview of the program, focusing on the program details and what is needed to meet the requirements. Subsequently, the SP students, who have completed two or more semesters in the program, were awarded with certificates by the Vice Chancellor, Professor Imran Rahman.

The formal segment was followed by the cultural program which began with a soulful recitation of Marina Keegan’s poem, “Bygones” by Amreeta Lethe Chowdhury. The spirits of the audience were lifted by the beautiful cover sung by Tanjila Fairoz of the song, “Dheem Ta Na” by Kona, with Mustofa Zahir on the guitar. To add a taste of nostalgia, DEH graduating student from MA, Krishti Aung Leona shared her experiences and memories that she had gathered during her journey with ULAB. The cultural segment was resumed with Tasfiyah Saba rendering an exciting musical piece, “Tomar Ghore Boshot Kore Koy Jona” originally sung by Borno Chakroborty. To everyone’s surprise and delight, an impromptu singing performance of Ayub Bachchu’s “Shei Tumi” followed, executed by a DEH graduating student from BA, Vincent Dip Gomes, accompanied by Marzuk Ahmed Khan Mojlish’s acoustic guitar refrains. Later, a powerful musical performance of the song “Aj Raate Kono Rupkotha Nei” by Old School was staged by Mustofa Zahir on the vocals and Marzuk Ahmed Khan Mojlish on guitar. After the successive singing performances, Shukanta Bhattacharya’s “Obhibadon,” was recited by Nandita Saha. Another speech filled with nostalgic spirit was delivered by Shariyer Hossain Shetu, a DEH graduating student from BA. The cultural segment ended with a thrilling dance performance by Tivana Rahman Ridi and Nishat Tabassum’s short speech on the theme (Shades of Memories) of the event, together with a slideshow showing graduates’ names and messages, as a tribute to the graduating students.

Dr Syeda Farzana Hafsa, Assistant Professor, DEH, delivered the vote of thanks to the faculty committee members who helped put the event together. The event was hosted by Umme Hani Anika from MA. The poster for the event was designed by Oriha Shouptik. 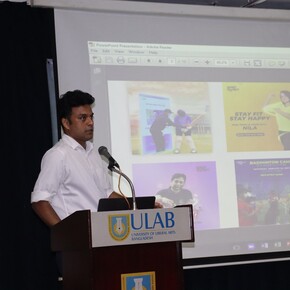 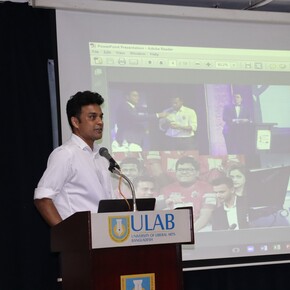 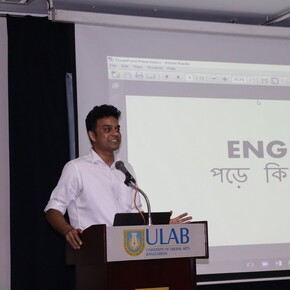 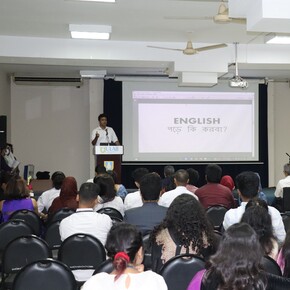 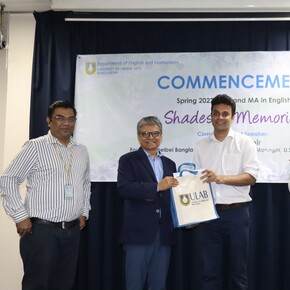 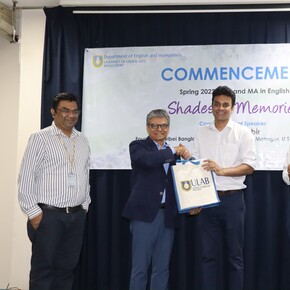 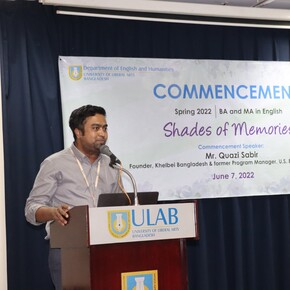 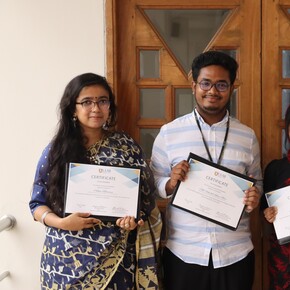 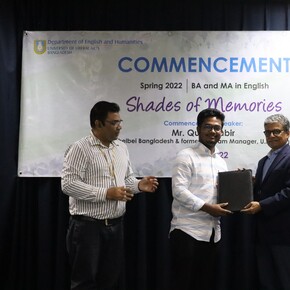 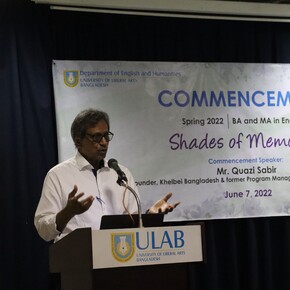 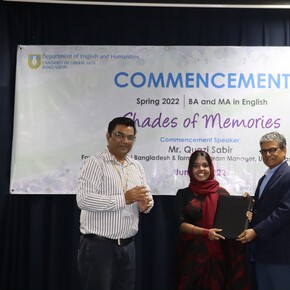 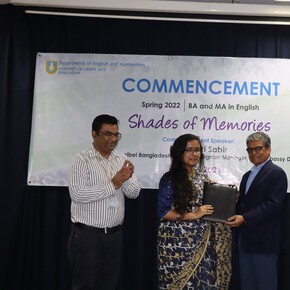 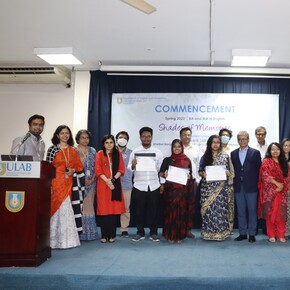 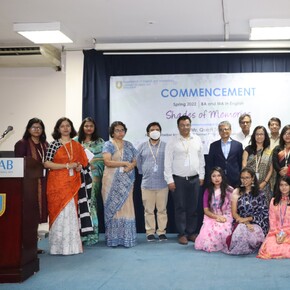 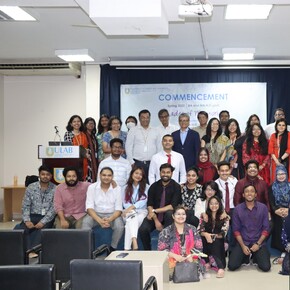 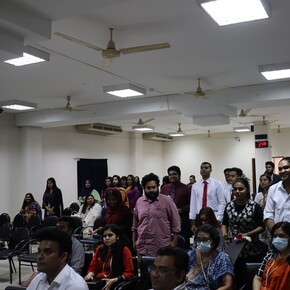 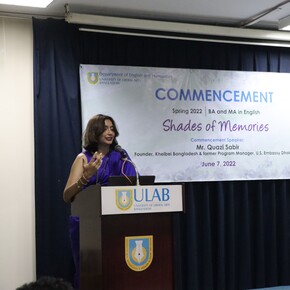 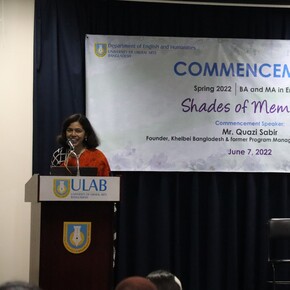 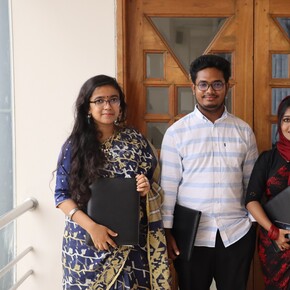 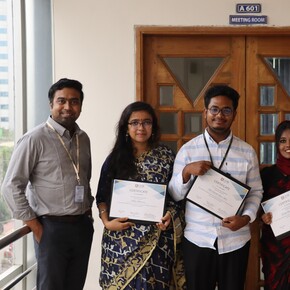 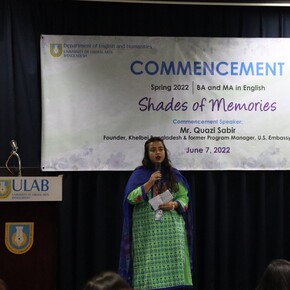 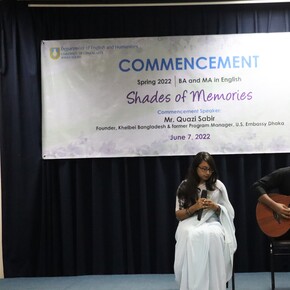 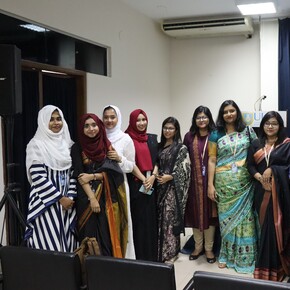 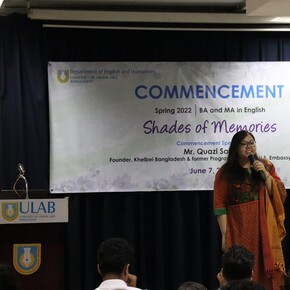 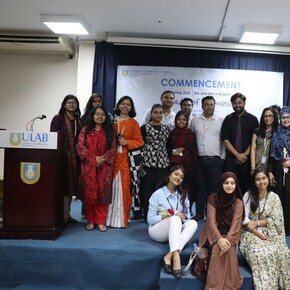 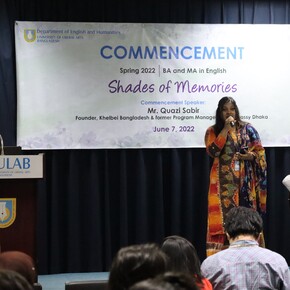 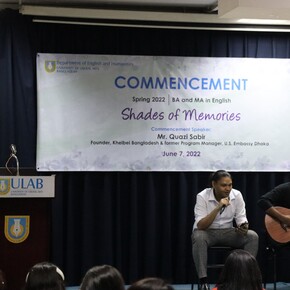 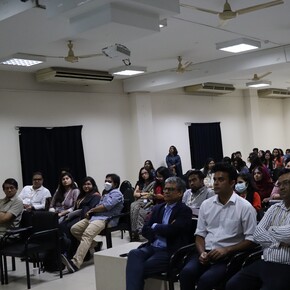 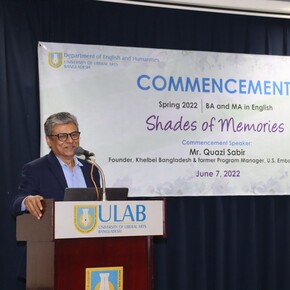